Located in the south-west part of China, Tibet is considered to be the highest region on earth as theTibetan Plateau and its surrounding area lies above 1600 meters. There are some of the world's tallest mountains in Tibet including Mount Everest situated on the border with Nepal. Tibetan Plateau is the source of some of the major rivers like Yangtze, Yellow River, Ganges and Indus River. Tso Mapham in western Tibet near mount Kailash is the origination of the Indus and Brahmaputra River and this mountain is a holy pilgrimage site for both Tibetans and Hindus. Khang Rinpoche is the Tibetan name for Mt. Kailash. Hindus believe that the mountain is the home of Lord Shiva. Besides that, there are numerous high-altitude lakes in Tibet which include Lake Mansarovar, Namtso, Qinghai Lake, Pangong Tso, Siling Co, Yamdrok Lake, Lhamo Rakshastal, and Dong Co. Qinghai Lake is the largest lake of China. The atmosphere of Tibet is normally dry, so it can be traveled all year round.

Lhase is the Capital of Tibet Autonomous Region and also the most popular city. Potala Palace and Norbulingka are the two heritage sites in Lhasa, which were the resistances of the Dalai Lama. Lhasa is also the house of significant temples and monasteries such as Jokhang and Ramoche Temple. The second-largest city of in Tibet is Shigatse and Gyantse and Qamdo are also amongst the largest.

Religion is very important to Tibetans and has played a big role in all aspects of their lives. Bon, the indigenous religion of Tibet was overshadowed by Tibetan Buddhism which is the distinctive form of Mahayana and Vajrayana. Apart from Tibet, Tibetan Buddhism is also practiced in Mongolia, parts of northern India, parts of Nepal, the Tuva Republic, the Buryan Republic, the Republic of Kalmykia and some parts of China.

Tibetan art and architecture reflects the Buddhism and is very popular among the lovers of art and architecture. Potala Palace is the best example of Tibetan architecture which is visited by around 2 million people every year from all over the world. The most important festival of Tibetan people is Losar, the Tibetan New Year. When it comes to food, tsampa, dough made from barley flour is the major one that is either rolled into noodles or made momos, steamed dumplings. 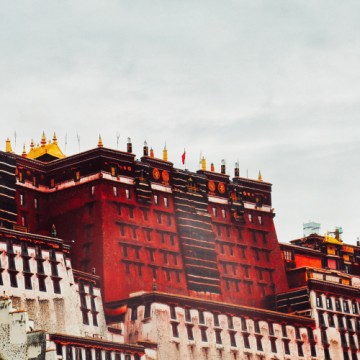