Tibet is surely a wonderful destination apart from most in the world, the rolling hills of the high plateau and the stunning Himalayas are none to any. Tibet covers 1.2 million sq.kms constituting one eighth of Chinas land mass, with an average elevation of 4,000 meters above sea level, and over 50 peaks above 7,000 meters, Tibet has become a real paradise for mountaineers and explorers. Every traveler wants to taste Tibet with its rich Tibetan cultural heritage, incredibly dramatic landscapes and fascinating political history as a lifetime dream. Today in the age of information with the net work of computers, mysterious places are rare to be found. But Tibet & Lhasa was forbidden land for travelling for several years before opened for travelling.  Tibet is one of those extraordinary destination where indeed adventure lurks around every corner!

Lhasa is the spiritual and political capital of Tibet. Lhasa means in Tibetan “The land of gods". There are numerous scenic spots and historical attractions, among which Potala Palace, Nobulingka, Drepung Monastery, Sera Monastery, Ganden Monastery and Jokhang Temple being the most famous. Tashilhunpo Monastery is its major historic attraction. Mt. Kailash, the near-legendary mountain in western Tibet is holy to both Hindus and Buddhist. People come from far away lands to perform a pilgrimage, one even circle the mountain on the stomach. The mountain is the source of four major Asian rivers. 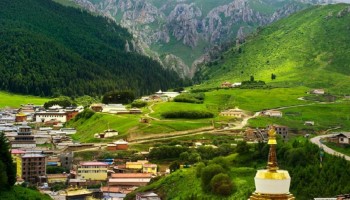